This post describes an exploitable arbitrary pointer dereference vulnerability in splwow64.exe. This vulnerability can be triggered from the Internet Explorer Renderer process and allows a Sandbox Escape.

The vulnerability allows to arbitrarily write to the address space of splwow64.exe from a Low Integrity process by crafting specific LPC messages to the splwow64.exe process.

The vulnerability has been tested on both a Windows 7 x64 and Windows 10 x64 machine.

In this post I will describe where the vulnerability lies and how to exploit it to achieve a full working Sandbox Escape from the Internet Explorer Sandbox.

The vulnerability seems not to be patched on Windows 7 and for this reason I will not publish the source code to exploit it.

The bug lies in the handling of a specific LPC call to the splwow64.exe process which enables to call the memcpy function in splwow64 address space with arbitrary parameters. This gives an attacker an extremely powerful primitive since it allows to write in the memory of a higher integrity process and escape the browser Sandbox without the need to rely on a Kernel Exploit.

Splwow64.exe is a Microsoft executable which gets executed every time a 32-bit application is accessing one of your installed printers. This process is particularly interesting since it is one of the Internet Explorer Elevation Policy whitelisted processes. In other words, any call from a Low Integrity IE renderer process to spawn this process will result in splwow64.exe being loaded as a Medium Integrity process.

Before delving into the analysis of the vulnerability itself, let’s try to get a high level understanding of how the Splwow64 process actually works.

After starting execution the splwow64.exe will create a LPC port by calling the ZwCreatePort API and will start waiting for incoming connections.

Let’s have a look at the ZwCreatePort function.

As you can see, the second parameter is a pointer to an Object Attributes structure which will point to a UNICODE_STRING function containing the name of the LPC port created by the process.

The first thing we need to understand in order to connect to this LPC port is how the LPC port name is generated! If you’ll inspect the Object Attributes pointer parameter to ZwCreatePort multiple times (each time after rebooting the machine), you will notice that a part of the LPC port name will change after every reboot.

The VARIABLEPART will change after every reboot of the machine.

This implies that to be able to actually connect to this LPC port from the IE Sandboxed process we will need to understand how to generate the LPC port name.

Luckily for us, the algorithm to generate the variable part of the LPC port name is pretty trivial and will look like this:

Congratulations! You are now able to connect to the LPC port!

We will now need to understand how LPC messages are parsed by the splwow64 process. Since a full explanation of the inner workings of the splwow64 process is beyond the scope of this article, we will just focus on the bigger picture to gain enough knowledge about the vulnerability itself and its exploitation.

In a nutshell, the splwow64 will parse the incoming LPC messages in this way:

This implies that as long as the sent message is 0x20 bytes long, we will be able to call the GdiPrinterThunk function with arbitrary parameters!

Sounds good! We will now need to understand how the GdiPrinterThunk actually works to see whether we can trigger something interesting by controlling the function parameters.

This function is where the actual arbitrary dereference bug lies: if the byte located at the offset 0x4 of the address passed as the first parameter will be 0x76 (0x75 on Windows 7), the memcpy function will be called with parameters completely controlled by the attacker! 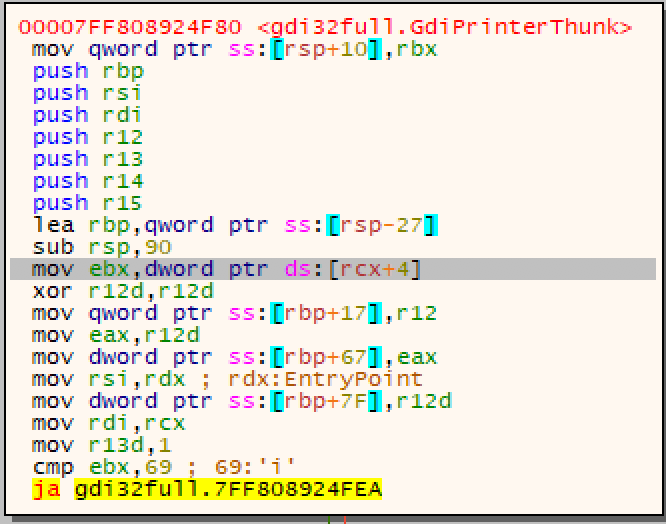 Let’s take a better look at the pseudo C code:

This is an arbitrary pointer dereference which allows us to deliberately write to the splwow64.exe address space from a Low integrity process!

But how can we actually trigger it?

As stated before, the GdiPrinterThunk function will be called with the following parameters:

To construct our Write What Where primitive, we can create a Shared Section and specify the address of this shared section at the offset 0x30 of the LPC message.

So here we are! We can build a very powerful Write What Where Primitive!

Unfortunately, we will still need to solve some problems to actually escape the Internet Explorer Sandbox:

Since we are not able to write to an executable memory page nor we are able to make the memory page writable by calling VirtualProtect, we will need to think about something else. The first thing that comes to mind is to overwrite an existing function pointer with the address of a function like LoadLibraryA or WinExec and, as long as we are able to trigger a call to this function pointer with arbitrary parameters, we would be done!

Let’s take a look at the OpenPrinterW function:

As you can see in the screenshot above, the function will move into the RAX register an address located in the .data section of the winspool.drv function and verify this address by calling LdrpValidateUserCallTarget (Control Flow Guard).

On Windows 7, it will just jump to the address saved in the .data section as you can see in the picture below.

Since the .data section of the winspool.drv DLL is writable, we can just overwrite the stored address by using our Write What Where primitive!

As you can see in the picture above, the address has been overwritten with an address of our choice!

To be able to achieve what described above, we will need to know the address of the winspool.drv .data section in the splwow64 process! Luckily for us, the Address Space Layout Randomization on Windows systems is boot based: in other words, the base address of each system DLL is the same in every process until the next system reboot, regardless of their integrity level.

This implies that it will be enough to load the winspool.drv DLL in the sandboxed process address space , look for its data section and from there find the pointer to the OpenPrinter2W function and use the obtained address to overwrite it in the remote process by calling our WWW primitive.

Despite what stated above, to achieve full coverage this is not enough: on Windows 7 systems the Internet Explorer renderer process is 32-bit, while the splwow64 process is a 64 bit process. In other words, we will not be able to get the 64 bit addresses we need to successfully exploit this vulnerability.

To solve this problem, we have two options:

This is the simplest and most stable approach to solve the problem. Since Internet Explorer allows to write to the LocalLow folder from a Low Integrity renderer process, to leak the needed address we will just need the following:

A full description of how this technique actually works is beyond the scope of this article. I remand you to this excellent article about this topic. In a nutshell, the Heaven’s Gate is a technique which exploits how Windows actually achieves 32 bit code emulation on 64-bit systems in order to load 64 bit DLLs.

By using this technique, you will be able to load 64 bit DLLs in the address space of the Internet Explorer process and thus leaking the needed addresses without the need to write any file on disk.

Unfortunately, we are able to control only the first parameter and for this reason you should choose a function which takes only one parameter. My choice fell on two functions:

Despite its simplicity, this bug allows an attacker to fully escape the Internet Explorer Sandbox in an extremely simple and deterministic way! I find these types of bugs in legacy Windows components very fascinating and I think more of these kind of bugs will be found in the future.

According to my tests, this bug seems to be still working against a full-patched Windows 7 system and for this reason I chose not to publish the exploit code.